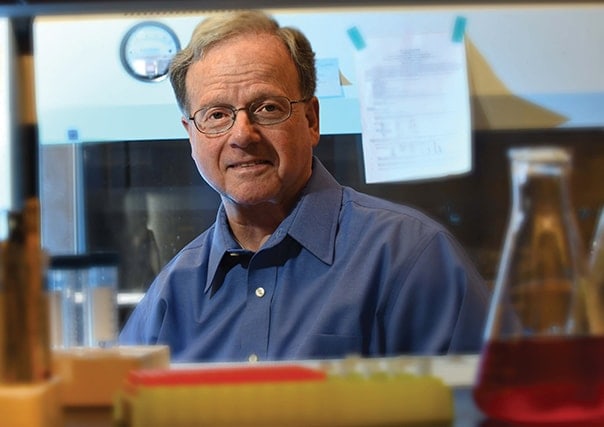 As a recent recipient of a prestigious National Heart, Lung, and Blood Institute Outstanding Investigator Award, Dr. Broxmeyer will continue his research that has expanded the possibilities of a cure in some forms of cancer and blood diseases in children and adults.

The NHLBI, part of the National Institutes of Health, created the highly competitive Outstanding Investigator Award to promote scientific discovery and innovation by providing long-term support and increased flexibility to principal investigators conducting heart, lung, blood and sleep research. The seven-year, $5.4 million grant is in recognition of Dr. Broxmeyer’s body of work and provides a continuous source of federal funding for the length of the grant.

An internationally recognized researcher at Indiana University School of Medicine and Indiana University Melvin and Bren Simon Cancer Center, Dr. Broxmeyer has spent much of his career effecting pioneering research in the field of hematopoietic stem and progenitor cells and regulation of blood cell production, with a focus on umbilical cord blood hematopoietic cell transplantation. For the layperson, hematopoietic stem and progenitor cells are the “parents” of all forms of blood cells.

In 1983, he and colleagues first proposed the concept of using umbilical cord blood as an alternative source of hematopoietic stem cells for transplant. The first proof of principle cord blood bank in the world was in his laboratory where cord blood for seven of the first 10 transplants was prepared and sent to distant transplant centers for use.

Cord blood is a rich source of hematopoietic stem and progenitor cells, which reproduce new blood cells that can be used for therapeutic purposes. Cord blood offers advantages when used for transplant: It doesn’t have to completely match the human leukocyte antigens of the recipient because cells found in cord blood are more adaptable and graft-versus-host disease, a potentially deadly transplant complication, is less common and less severe with a cord blood transplant. Also, cord blood can be collected at birth and, based on Dr. Broxmeyer’s work, can be banked for at least 25 years as a safe source for treatment, should the need arise.

Cord blood as a transplant solution, however, is not without its hitches. There are issues, including the fact that the number of stem cells collected from one umbilical cord are limited and not always adequate for transplant in a large child or adult.

Over the years, the Broxmeyer lab has been working on several solutions to that issue, including a remarkable finding that was published in Cell in 2015. Dr. Broxmeyer and seven investigators working in his lab, along with other investigators at IU, found that the numbers of stem cells in bone marrow and umbilical cord blood had been grossly underestimated because they are typically collected in ambient air that has an oxygen level of about 21 percent.

However, the oxygen levels in bone marrow and cord blood are much lower. By collecting the bone marrow and cord blood under much lower (3 percent) oxygen levels, they determined that there were many more useable stem cells than previously realized as the low oxygen levels kept the stem cells from differentiating and losing their stem cell properties. These changes took place within minutes of the cells being exposed to ambient air, a process called EPHOSS – Extra Physiologic Oxygen Shock Stress.

In earlier research, published in the Journal of Immunology in 2002, Science in 2004, and Nature Medicine in 2012, Dr. Broxmeyer and his team identified an enzyme, dipeptidyl peptidase-4, that can reduce blood cell production. DPP-4 is present in bone marrow cells, blood cells and the serum of people and animals and can change the function of the proteins that regulate blood cell production. Understanding this enzyme, how it works and how to block it allows scientists to modify treatments to enhance the efficacy of the blood cell production.

Dr. Broxmeyer is a professor of microbiology and immunology, the Mary Margaret Walther Professor Emeritus, and chairman emeritus of the Department of Microbiology and Immunology at IU School of Medicine. He is also a co-leader of the hematopoiesis and hematologic malignancies research program at the IU Simon Cancer Center.

During his tenure at IU School of Medicine, he and his team have received more than $92 million in research grants and published more than 780 papers that have been cited more than 61,000 times. He is known on campus as a prolific, dedicated and visionary scientist. The phrase “a gentleman and a scholar” can be cliché, but it truly describes Hal Broxmeyer.

During his tenure at IU School of Medicine, Dr. Broxmeyer and his team have received more than $92 million in research grants and published more than 780 papers that have been cited more than 61,000 times.

Dr. Broxmeyer has been honored with national and international awards for his research, including the prestigious Karl Landsteiner Award in 2002 and the E. Donnal Thomas Prize from the American Society of Hematology in 2007. He has served in numerous professional leadership roles, including in 1991 when he became president of the International Society for Experimental Hematology and Stem Cell Research, and in 2010 when he became the only non-M.D. to be elected president of the American Society of Hematology.

All of this research and more produced in his lab over the past four decades is focused on understanding and curing disease. It is his life’s work, but in typical Broxmeyer fashion, he makes it sound so simple, so easy.

A more scientific explanation: The grant is meant to further the understanding of the hypoxia and enzyme studies that modulate blood cell production in normal, malignant and non-malignant disorders for increased therapeutic benefit and to pursue other paradigm changing scientific concepts that his laboratory can identify and study for health benefits.

In other words, Dr. Broxmeyer and his lab investigators will put the Outstanding Investigator Award to good use to improve cord blood transplantation and other future therapeutic options for patients.