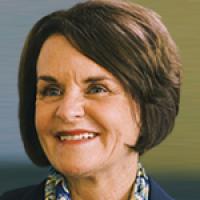 Victoria Champion, Ph.D., Distinguished Professor of Nursing and the Edward and Sarah Stam Cullipher Endowed Chair at IU School of Nursing, serves as the cancer center’s Associate Director of Community Outreach and Engagement and Population Science.

Champion is an internationally known cancer prevention and survivorship researcher and arguably one of the most prolific and successful scientific investigators in cancer prevention and control in Indiana University history. Continuously funded by the National Institutes of Health (NIH), the American Cancer Society and other major funding agencies for 37 years, Champion has received nearly $50 million in grant awards as a principal investigator since 1984. Currently, Champion is finishing a Multiple Principal Investigator (MPI) grant from the National Cancer Institute focusing on an intervention trial to improve cervical, breast and colorectal cancer screening in rural Indiana and Ohio. This innovative, first-ever intervention trial simultaneously tests interventions to support adherence to all guideline-approved cancer screenings in women.

In countless ways, her life’s work is defined not only by what she has personally achieved but also by her widespread impact. In addition to the colleagues and students she’s trained, Champion has pushed the boundaries of interdisciplinary teamwork and technology-driven interventions to develop novel programs that have helped thousands of people get lifesaving breast and colon cancer screenings. Her methods and tools have been adapted by fellow researchers to promote preventive screening and early detection of other cancers and have been used in communities and among underserved populations in the United States and around the world. Later, she branched out into a second program of research focused on cancer survivorship.

For the past 25 years, Champion has led the development and dissemination of cancer control research at Indiana University. With the late Dr. Stephen Williams, the inaugural director of the IU Simon Cancer Center, she founded the Indiana Cancer Consortium (ICC), which now includes more than 150 participating organizations throughout Indiana. She is currently serving as president of ICC.

Champion has served on many national advisory panels, including a presidential appointment to both the National Cancer Advisory Committee (2008-14) and the CDC executive committee for breast and cervical cancer. She was appointed as a member of the Department of Defense's breast cancer integration panel and has served on and chaired NCI and American Cancer Society study sections, as well as serving on countless ad hoc study sections and site reviews. In 2016, the President’s Medal for Sustained Academic Excellence was bestowed on Champion by President McRobbie at the opening of the IUSON Champion Center for Cancer Prevention and Control.

Champion’s commitment to training the next cadre of behavioral oncology researchers in interdisciplinary science is a key component of everything she does. She has been the senior mentor for many successful students who received F31, F32 and K07 awards. She is the recipient of a K05 senior mentoring award a testament to her accomplishments and has led NCI training grants for 13 years, including two five-year R25 awards and a five-year T32 training grant which was just renewed for five additional years in interdisciplinary cancer prevention and control. Champion is widely sought after as a consultant for cancer control and training serving on the external advisory board of six NCI T32 training grants and two NCI comprehensive cancer centers. As Associate Director of Community Outreach and Engagement at the IU Simon Cancer Center, she works with cancer center scientists and leaders throughout the university, as well as with private foundations and community partners to:

Champion and her husband are the proud parents of three children, Douglas, an electrical engineer at Delphi, Cynthia, a pediatrician in Park City, and Kristen, an epidemiologist in Denver. They enjoy traveling, diving, photography and support of Family Promise of Hendricks County, a homeless shelter focused on supporting families.