Miles for Myeloma began in 2005 when Rafat Abonour, MD, and a small group of myeloma patients and friends decided to bike from Carmel to Marion, then run from Marion to Fort Wayne over a weekend to raise awareness of the incurable disease.

They set a modest goal of raising $25,000, but instead raised $130,000—and produced a passion in multiple myeloma patients and their loved ones that far exceeded the money contributed.

The 17th year of M4M, unfortunately, looked much like 2020, as we once again were not able to gather for our annual events.

Still undeterred, patients and supporters of Miles for Myeloma worked together to reach the MYELOMA MILLION—a two-year, virtual campaign to raise dollars, donors, and distance in support of myeloma research and patient care.

Although Dr. Abonour made the difficult decision to cancel the annual ride and patient dinner due to the pandemic, he remained committed to bringing FUN and important research and patient care updates to the group.

Inviting everyone to ride along, he hosted six virtual Happy Hours webinars. In each installment, Dr. Abonour interviewed a different colleague-friend about their life, their path into medicine, and their current projects.

It was hard to imagine a second year without gathering at all, so in September a small group of patients, researchers and supporters joined Dr. Abonour at Eagle Creek Park in Indianapolis. They celebrated the year by walking a commemorative one-mile loop around the park and recorded the video below.

The goal is still to make myeloma history. And hopefully 2022 will allow the group to gather together again!

Our community is in a great place where people believe in science to overcome a variety of illnesses and continue to generously contribute to our fight against myeloma.

Although the annual ride and patient dinner was canceled due to COVID-19, Dr. Abonour challenged the community with the Myeloma Million, a virtual effort to raise dollars, donors, and distance in support of myeloma research and patient care.

This year marked the 15th anniversary of Miles for Myeloma. At the event, Mayor W. SuzAnne Handshoe presented a key to the city of Kendallville to Dr. Abonour, her oncologist.

The community raised an astounding $430,000 through generous Tour Champion contributions, fundraising events, and individual volunteer campaigns. We also celebrated a very generous $500,000 gift made to myeloma research by the family of a grateful patient. To date, Miles for Myeloma has raised more than $6.3 million.

Over 30 cyclists participated in the two-day ride from Indianapolis to Terre Haute, Indiana, and back. At the finish line, they were greeted by more than 500 multiple myeloma patients and their families at the Scottish Rite Cathedral for a celebration followed by the annual patient education symposium and dinner. The event raised more than $376,000. 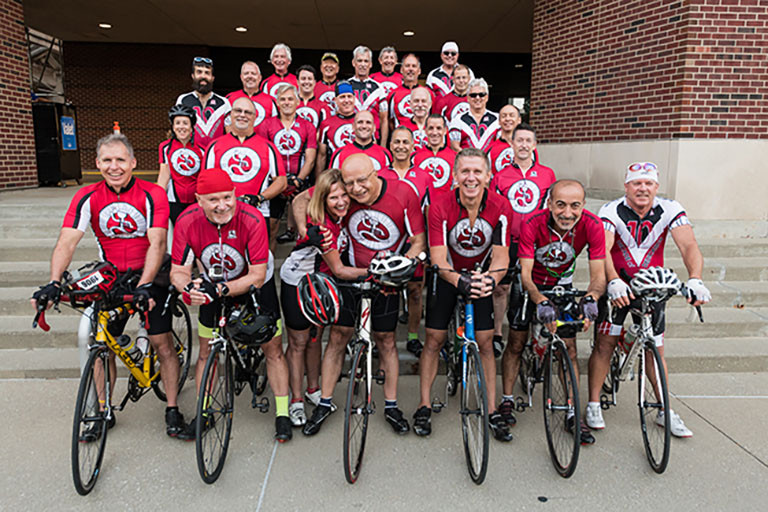 The two-day event took cyclists from Indianapolis to Muncie, Indiana. They were greeted by more than 500 myeloma patients and their families at the annual patient education symposium and dinner at the Scottish Rite Cathedral. The event marked $5 million raised for myeloma research and patient care.

The two-day event took cyclists from Columbus, Ohio, to Indianapolis, Indiana. Several new riders joined this year, including a new patient who came from Santa Fe, New Mexico, to participate. In the history of the event, 2016 had the most cyclists and attendees at the annual patient education symposium and dinner.

This event honored the memory of Steve Watson, a longtime Miles for Myeloma donor and volunteer who passed away in July. The group of 25 cyclists started in St. Louis and then rode through Effingham, Illinois, Terre Haute, Indiana, and finally arrived in Indianapolis for a finish-line celebration before the start of the annual dinner and educational symposium. The event raised more than $320,000, bringing the total to $3 million.

To celebrate the 10th anniversary of Miles for Myeloma, the cyclists rode for three days, from Indianapolis to Spencer, then to Terre Haute and finally to Indianapolis for a finish-line celebration before the start of the annual dinner and educational symposium. The event raised more than $275,000, bringing the decade-long total to more than $2.75 million.

Cyclists covered more than 104 miles the first day from Niles, Michigan, to South Bend, LaPorte, and Monticello. The ride continued the next day and ended in Indianapolis before the start of the annual dinner and educational symposium. 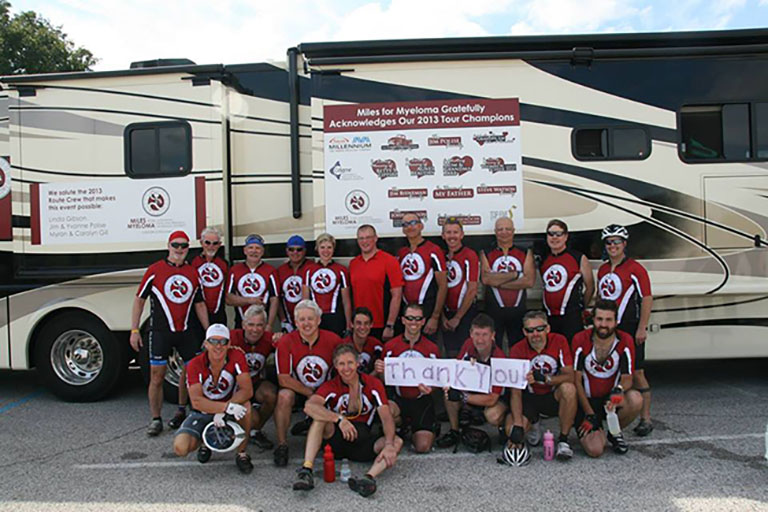 Cyclists covered 119 miles the first day from Cincinnati to Nashville, Indiana.. The ride continued the next day and ended in Indianapolis before the start of the annual dinner and educational symposium. The event raised $313,000, bringing the total to more than $2 million.

With the mission of funding research that leads to more tomorrows for myeloma patients, Dr. Abonour rode nearly 200 miles in two days, traveling from Louisville, Kentucky, to Richmond, Indiana, and then to Indianapolis. The event raised more than $242,000, bringing the total to more than $1.75 million.

Dr. Abonour and his fellow cyclists rode from Muncie to Fort Wayne and Rochester via Logansport, through Lafayette and back down to Indianapolis, covering 234 miles. The cyclists were met by nearly 400 supporters at the finish line on the IUPUI campus, before the start of the annual dinner.

During the dinner, the group heard from Kevin Hunt, a 35-year-old myeloma patient who climbed Mt. Rainier in July 2010 in an effort he dubbed “Mountains for Myeloma” that raised more than $10,000 for the cause. This event raised $275,000.

Dr. Abonour and his fellow cyclists rode from Evansville to Indianapolis, covering 200 miles and climbing 9,000 feet in just 48 hours. Dr. Abonour finished the last 80 miles into Indianapolis with one of his myeloma patients by his side.

The cyclists were met by more than 350 supporters at the finish-line celebration on the IUPUI campus, and afterwards former Indianapolis Colts defensive player Elijah Alexander delivered an inspirational speech. The event raised $239,000 bringing the total to $1.2 million.

The highlight of this year’s midnight kickoff was more than 100 luminary bags, each bearing the name of an individual lost to multiple myeloma. The luminaries lit the path of the runners as they departed the IU Simon Comprehensive Cancer Center. About 50 cyclists trekked through the hills back to Indianapolis and finished at the cancer center with a celebration. The event raised $330,000 bringing the total to $1 million.

Dr. Abonour ran an astonishing 60 miles from Indianapolis to Bloomington and finished on the football field at IU Bloomington just before the kick-off of a football game. More than 250 patients and their family members formed a human tunnel to welcome Dr. Abonour onto the field. The following day, Abonour cycled back to Indianapolis to a finish-line celebration at the cancer center. The event raised $300,000.

Dr. Abonour ran from Carmel to Kokomo and then cycled from Kokomo to South Bend, finishing at South Bend Memorial Hospital. A highlight of the event was that one of Dr. Abonour’s patients, despite being more than 65-years-old and suffering from poor kidney function, completed the entire cycling leg alongside Gina Kramer, RN, myeloma program nurse coordinator. The event raised $240,500.

Get involved with Miles for Myeloma