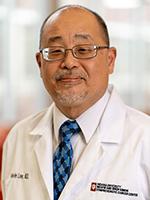 I believe that research cures cancer. For this to be successful, we need to get our science into our patients.

He is also associate dean of cancer research, H.H. Gregg Professor of Oncology, and professor of medicine and microbiology and immunology at IU School of Medicine. In addition, he is a physician at IU Health. His multiple myeloma expertise is invaluable to the IU team, a multidisciplinary team of researchers and clinicians working to cure the blood cancer. Two other teams are concentrating on developing cures for triple negative breast cancer and childhood sarcoma. The teams are part of the IU Precision Health Initiative, the inaugural recipient of IU’s Grand Challenges program.

That bold initiative and the university’s willingness to use the word “cure” attracted Lee to IU.

In addition to his duties as director of the cancer center, he leads a research lab with a team focused on multiple myeloma, while in clinic he sees patients with the disease.

Previously, Lee was the Jacobs Family Chair of Immunology, a professor of medicine, vice chair of medicine, and senior vice president of basic sciences at Roswell Park Comprehensive Cancer Center in Buffalo, N.Y.

It was at Roswell Park where he led America’s groundbreaking collaboration with cancer researchers in Cuba, who have developed a lung cancer vaccine that Roswell is testing in clinical trials.

An immunology expert, Lee is the principal investigator on multiple myeloma clinical trials, he holds two patents, and he has authored more than 100 papers in peer-reviewed journals.

He currently holds $1.5 million in research grants. During his career, he’s earned grants from the National Institutes of Health, the National Cancer Institute, the Multiple Myeloma Research Foundation, the Leukemia and Lymphoma Society, and the Breast Cancer Resource Foundation among others.

Among his many notable honors, he is a National Merit Scholar, Presidential Scholar Finalist, and an American Cancer Society Fellow.

He and his wife, Louise, are the parents of Kristen, a freshman at Butler University, and Justin, a senior at Northeastern University.

He proudly roots for the Buffalo Sabres, Buffalo Bills, Indianapolis Colts (in non head-to-head games against the Bills) and the Indiana Pacers.