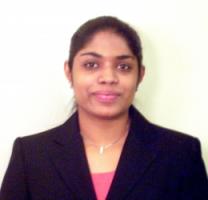 Significance of Research Over the past many decades, we have gained a good understanding of how the integrity of the genome correlates directly to human health and particularly to the onset of cancer. The ability of the cell to duplicate the DNA with absolute accuracy is the hallmark of the maintenance of genome stability. Studies have implicated replication-associated random errors to be the underpinning cause for nearly two-thirds of mutations that drive cancer development. DNA replication proceeds with the leading strand being synthesized continuously, and the lagging strand is synthesized discontinuously, as short stretches of DNA, known as Okazaki fragments. One round of mammalian cell division generates ~ 50 million Okazaki fragments, all of which need to be efficiently processed, to form a fully functional DNA strand. Current work in our laboratory is focused on understanding the successful processing of the Okazaki fragments, which is vital to the maintenance of genome fidelity and thereby cellular stability. Additionally, many proteins involved in the replication process also play redundant roles in DNA repair pathways, and thus, our laboratory also has an interest in elucidating repair mechanisms within the cell. One of the principal challenges in studying any fundamental biological pathway is to define the dynamic spatiotemporal relationship of the enzymes and substrates involved in the pathway. For our studies, we use three powerful tools; biochemistry, chromatin biology, and genetics to define mechanisms involved in the maintenance of genome stability during DNA replication and the accompanying DNA repair processes. Ongoing Research Projects Okazaki fragment processing (OFP) proceeds via two redundant pathways. In one pathway, called the “short flap pathway”, adjacent Okazaki fragments are immediately ligated after removal of RNA, and in the other, called the “long flap pathway”, the entire initiator primer synthesized by pol α is removed, and resynthesized by the high-fidelity DNA polymerase delta (pol δ). Consequently, the short flap pathway while faster may allow for misincorporation of pol α synthesized nucleotides into the genome, whereas the long flap pathway allows for high-fidelity synthesis via removal of the entire pol α initiator primer, albeit it may be slower. We are currently unaware of when the cell chooses one pathway over the other and, how this choice dictates the mutational landscape of the genome. Recent studies have shown that pol α synthesized primers are retained in the genome and that the nucleotide substitution rates at Okazaki fragment junctions are higher. High-resolution mass spectrometry studies analyzing the global proteome identified many proteins in the OFP pathway to be post-translationally modified by lysine acetylation. Our biochemical analysis of individual in vitro acetylated recombinant OFP proteins suggest lysine acetylation promotes the use of the long flap pathway, in turn promoting higher-fidelity synthesis. Based on our findings, it is our current hypothesis, that lysine acetylation of OFP proteins may function as a regulator switch, that promotes the choice of the long-flap pathway over the short-flap pathway. This choice may allow the cell to balance replication fidelity and efficiency simply by triggering OFP protein acetylation while replicating specific regions on the genome to ensure high-fidelity synthesis. Our specific research projects are designed to test this hypothesis in vivo and in vitro, with the intention of refining our understanding of the role of OFP protein acetylation in regulating genome stability. Multiple factors dictate high-fidelity replication, including choice of polymerase and efficiency of the mismatch repair pathway. Through our research, we are testing the function of lysine acetylation as a regulatory mechanism that improves the fidelity of DNA synthesis. Information from our studies could open avenues in the development of therapies to accurately maintain our genome and prevent cancer-causing mutations. Clinical Impact of Our Research The most fundamental challenge that the cell encounters, is to accurately pass on its genetic information to the daughter cells during the process of replication. Errors in the genetic information that accumulates over a period contribute to genome instability, which in turn, directly impacts the rate of cancer initiation, augment progression, and can also influence the overall prognosis of the patient. The stability of the human genome depends on multiple factors that determine the fidelity of the replication process. A recent study showed that nearly 66% of human cancers are attributed to random errors that are generated during normal cellular DNA replication, underscoring the importance of replication fidelity in the development of cancer. Consequently, understanding the mechanistic principles and the regulatory processes involved in DNA replication are directly relevant to understanding human health and in the development of new therapies. The observation that histone acetylation is dysregulated in numerous human diseases has led to the development of small-molecule inhibitors of histone deacetylases (HDACs), which have a long history of clinical utility. However, these inhibitors are solely focused on modifying chromatin structure to alter gene expression and no studies have been performed to understand their impact on non-histone proteins. The efficient and accurate maturation of Okazaki fragments is a crucial process towards maintaining a stable genome and our results suggest that lysine acetylation of Okazaki fragment processing (OFP) proteins plays a role in regulating the choice of the processing pathway. While the deacetylase inhibitors have shown great promise, patients frequently develop resistance to this drug, and moreover, these inhibitors don't seem to work on solid tumors. Our studies will provide valuable insight into how the maintenance of the genome is impacted by altering cellular acetylation levels. This knowledge can be harnessed to develop precision medicine targets for patients that have developed chemoresistance and can also be used for improving targeted therapies for a subset of cancers.